A Guide to Every Beef Cut to Know 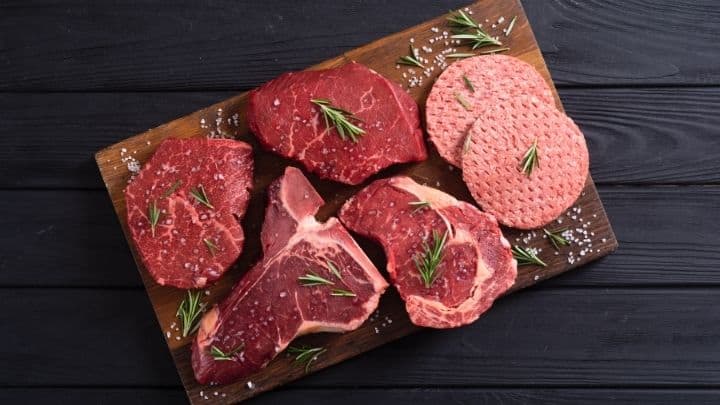 With over 100 different cuts of beef available, selecting the right one can be an especially daunting proposition, especially if you’ve never been inside a butcher shop before. If you want to better familiarize yourself with the various cuts, don’t hesitate to read our guide to every beef cut to know.

Meats from chuck (or shoulder) are typically some of the most economically friendly in any shop. That is just part of the reason why some of the most popular cuts of beef come from the chuck. Varieties of meat from this section include seven-bone steak, flat iron steak, and short ribs. Common recipes that use this kind of meat include beef stew and beef roast. Some parts of the chuck are ground up to make the meat for hamburgers.

When preparing meats from chuck, it is generally best to take a slower approach to cooking them. This helps to eliminate some of the toughness present in the beef and helps to bring out the meat’s full flavor profile. A major benefit to chuck is the suitability of this meat for use in soups and stews. Additionally, when preparing beef from chuck, most of the connective tissue is cut away, especially with meat coming from the shoulder, also known as the shoulder clod area. This tissue can cause your meat to become chewy and tough if it is not properly removed.

Typically consisting of the meat from between the sixth and twelfth ribs, the beef rib cut features some of the most succulent meat available. The reason for this is that the major muscle in the area does not get worked out very much, resulting in meat that is both very tender and highly sought after. The desirable nature of this beef means that it is also some of the most expensive. The most well-known steak that comes from this section is the ribeye.

Ribeye can be prepared as a roast or steak, with an option for the bone to be in or out. Like meat from chuck, beef rib cuts are very tender and flavorful. Because of how juicy the steaks are, try to cook them quickly to avoid the meat drying out and losing its flavor.

As it is among the most costly available, butchers typically try to get as much of the meat for the ribeye as possible. Because of the clear preference for the ribeye for steak cuts, there isn’t much of a market for additional serving options. But one of the exceptions to this is beef back ribs. This features the meat that comes from between the ribs but generally isn’t prevalent.

When hearing the word “steak,” most people imagine a piece of meat that features part of the loin. These pieces of beef are generally considered the most desirable. These scrumptious cuts are sliced from the three major loins in the middle and rear sections of the cow—the short loin, sirloin, and tenderloin.

The short loin is the source of some of the most popular steaks available. All-time favorites such as the porterhouse, T-bone, and strip steak all come from this section. These succulent slices, along with other cuts from the short loin, are best cooked quickly at high heat to avoid drying out the meat. Meat from the short loin is typically very juicy and easy to cut if prepared and cooked properly.

Sirloin beef comes from the section immediately behind the short loin. The steaks that come from the sirloin are generally more economically friendly because they are not as tender. However, coming from the sirloin doesn’t make them any less delicious. Meat from this section is generally tasty if a bit tougher than its short loin counterpart.

Beef tenderloin is the final major loin that butchers prepare. As the name suggests, meat from the tenderloin is the most tender portion of the beef. Being the most tender and delectable cut of meat does come at a price, as this is typically the most expensive cut of beef in the entire butcher shop. What makes the tenderloin so unique is that it can be left in as part of the rib cut to produce T-bone and porterhouse steaks or removed to make varieties such as filet mignon. This meat contains very little fat and is best served medium-rare.

The round cut is where many people get the beef that they use for their everyday cooking. The meat from this cut is from the hindquarters and features meat that can be very tough as a result. This toughness comes from all the connective tissue, which can make this type of meat chewy if not fully and properly cooked. The meat from the round cut is generally inexpensive and has all of the nutrition of some of the more choice cuts of beef, making it great for any event where you have to feed a large group of people.

The round cut features three unique subcuts, similar to the others but each with its own unique characteristics. First is the knuckle, or the sirloin tip. The knuckle is not truly part of the sirloin, thus not as tender. Still, this variety of beef can be used in a roast to great effect so long as you remove the connective tissue. The second subcut is the top round, which can best be described as lean and tough. Even though this is the most tender part of the round cut, it is still best served sliced thin after being prepared slowly at low heat to preserve the meat’s natural juices. The final unique round cut is the bottom round, which is often used to make rump roast. This meat is the best to use in pot roasts because of how well they preserve flavor when being cooked at low temperatures.

Even with the three different varieties of round beef, they all are best when cooked slowly to avoid letting the meat dry out.

This guide to every beef cut to know is not exhaustive, however. Other cuts—such as brisket, skirt, and flank—have their diehard fans and reliable uses in countless recipes. To learn more about all of the different cuts, visit the best meat market in New York: Vincent’s Meat Market. Our shop in the heart of the real Little Italy proudly serves only the highest-quality freshest beef.